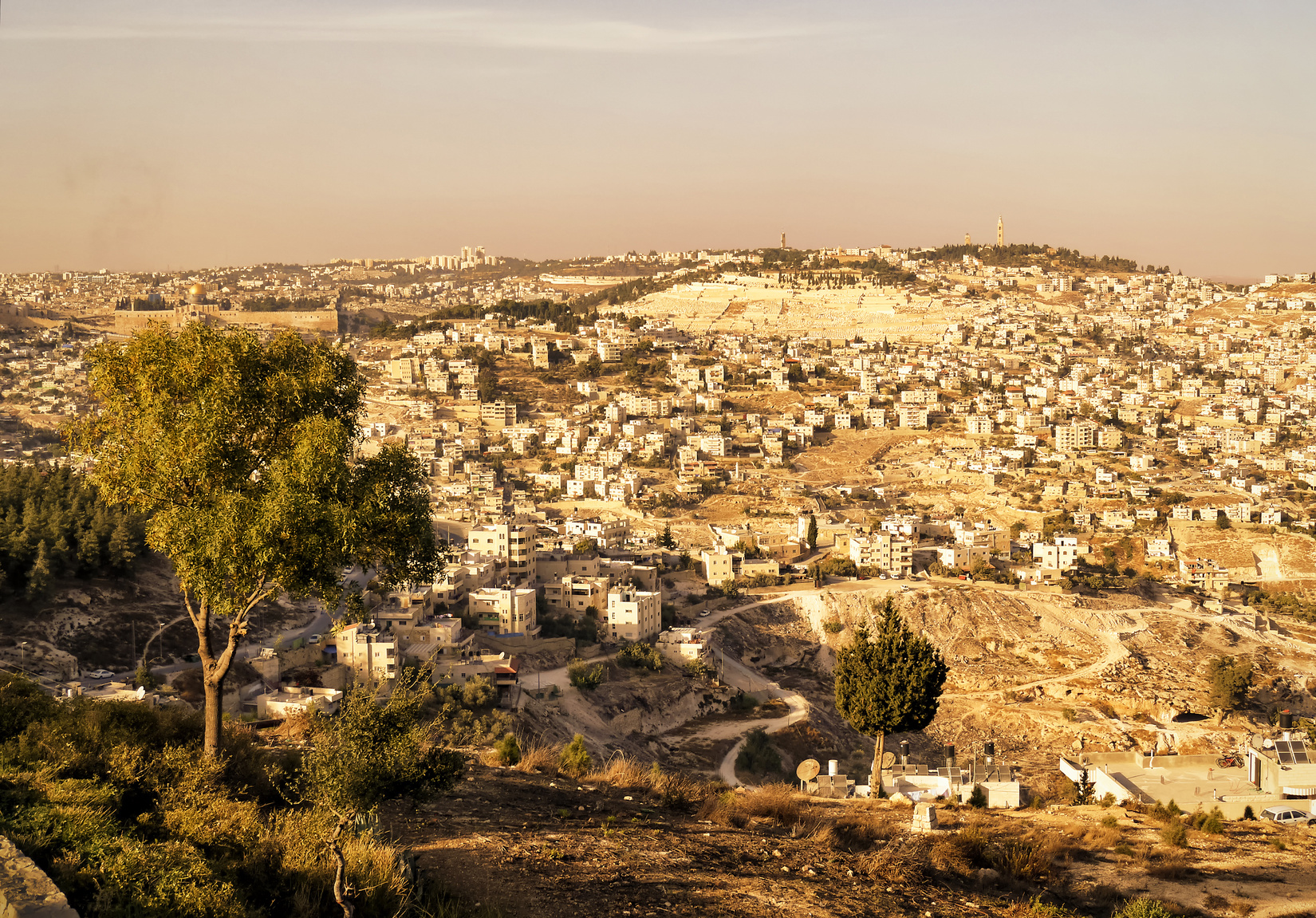 Now as He sat on the Mount of Olives, the disciples came to Him privately, saying, “Tell us, when will these things be? And what will bethe sign of Your coming, and of the end of the age?” (Matthew 24:3)

In the beginning of Matthew chapter 24, the disciples want to show Jesus the fantastic temple in Jerusalem, and maybe get an interesting conversation with Him about what they see. However, Jesus’ response is not very positive:

And Jesus said to them, “Do you not see all these things? Assuredly, I say to you, not one stone shall be left here upon another, that shall not be thrown down.   (Matthew 24:2)

Jesus does not “have time” to talk about the existing temple with His disciples, but wants to talk with them about something else, namely the time before He comes. By answering the way He does, He naturally leads the conversation to this topic. The disciples knew from the Prophet Daniel that the temple would fall apart in the end times:

… and the people of the prince that shall come shall destroy the city and the sanctuary; … (Daniel 9:26)

Now, this is the situation; Jesus and His disciples have left the centre of Jerusalem, and are now sitting together in a more silent area on the Mount of Olives. The disciples remember Jesus’ remark about the temple, and find this to be a good opportunity to ask Him about the end of times and his second coming:

… the disciples came to him privately. “Tell us,” they said, “when will this happen, and what will be the sign of your coming and of the end of the age? (Matthew 24:3)

However, Jesus does not specifically answer this question, but says:

This is Jesus’ main concern for His disciples before the end of the world; “Take heed that no man deceive you”. Jesus has many things to tell his disciples later on, dealing with the same question, but the headline and most important perspective for Jesus is that His children are not to fall away from Him. Many will come in His name and deceive many, He says, and warns us to take heed.

The deceiving of the Christians and the false prophets are mentioned by Jesus four times in Matthew 24. We have already seen verse 4, but Jesus emphasizes this fact three more times, as if the end times will have an increasing number of false prophets and signs.

Then many false prophets will rise up and deceive many. (Matthew 24:11)

For false christs and false prophets will rise and show great signs and wonders to deceive, if possible, even the elect. (Matthew 24:24)

Finally, we have Jesus’ statement in Matthew 24:25-26, confirming His warnings:

Jesus’ main concern for His children in the end times is that they will not go astray, lose their focus on Him, and lose their faith. This is to Him the most important threat and sign, although there are many other scary things and signs coming in these times, such as hunger, wars, earthquakes and floods. For Jesus, the scariest thing is that we might fall away from Him and His word. His message to us is: Many will fall away, many will be deceived. But not you, not me! His heart is burning for this not to happen to His children.

This reality – that there will be a great falling away from Jesus in the end times – is confirmed by Paul the Apostle in 2. Thessalonians 2:

Now concerning the coming of our Lord Jesus Christ and our being gathered together to Him, we ask you, brothers,  not to be quickly shaken in mind or alarmed, either by a spirit or a spoken word, or a letter seeming to be from us, to the effect that the day of the Lord has come. Let no one deceive you in any way. For that day will not come, unless the rebellion comes first, and the man of lawlessness is revealed, the son of destruction, who opposes and exalts himself against every so-called god or object of worship, so that he takes his seat in the temple of God, proclaiming himself to be God.
(2. Thessalonians 2:1-4, NIV)

Paul is hereby confirming Jesus’ words in Matthew 24, saying that there will be a great falling away from Christ in the end times. Paul calls it “the falling away”, or “the rebellion”, as specifying a certain event that is going to take place. When the rebellion comes, and the man of lawlessness Antichrist, is revealed, then we are to expect the coming of our Lord Jesus Christ.

Some people will probably say that there have always been persons falling away from Jesus and His word, and this is quite right. However, the end times will be recognized by the fact that millions and millions of people will turn away from Jesus Christ as the only fundament for Salvation. Christians will in many cases deny their faith in Jesus Christ, but many will try to hold on to their Christianity, although the fundament for their salvation has moved away from the Cross, into themselves or to another Christ. This is exactly what Paul warns against in 2. Corinthians 11:3-4:

But I fear, lest somehow, as the serpent deceived Eve by his craftiness, so your minds may be corrupted from the simplicity that is in Christ. For if he who comes preaches another Jesus whom we have not preached, or if you receive a different spirit which you have not received, or a different gospel which you have not accepted—you may well put up with it!

There may come a different spirit, there may come another relationship to Jesus Christ than what is sincere and pure, or there appear “christianities” that emphasize something else than the sincere and pure devotion to Christ – Christ Alone. This was the danger for the Corinthians, and also now for us as Jesus’ return is getting closer. How do we react when we meet another Christ than the one the apostles preached, or another gospel than the one we have received?

In the end times, many will turn away from Christ and the Gospel to other teachings as also Paul writes to Timothy:

For the time will come when they will not endure sound doctrine, but according to their own desires, because they have itching ears, they will heap up for themselves teachers; and they will turn their ears away from the truth, and be turned aside to fables. (2. Timothy 4:3-4)

We are to warn, and warn again, against this danger of falling away from the sincere and pure devotion to Christ. We are not to fall away from the precious salvation we have received in our Lord Christ Jesus. His works is the only thing we can count on in the final judgment – but His works is enough, enough indeed.

In this context, it is interesting to see the continuation in what Paul writes to the Thessalonians:

And then shall that Wicked be revealed, whom the Lord shall consume with the spirit of his mouth, and shall destroy with the brightness of his coming: Even him, whose coming is after the working of Satan with all power and signs and lying wonders, and with all deceivableness of unrighteousness in them that perish; because they received not the love of the truth, that they might be saved. And for this cause God shall send them strong delusion, that they should believe a lie: That they all might be damned who believed not the truth, but had pleasure in unrighteousness. (2. Thessalonians 2:8-12, KJV)

Paul the Apostle is referring to a wicked person who will appear right before the second coming of Jesus. He will appear after a time with Satan’s power, signs and lying wonders. This person is Antichrist, Gods enemy, and God will destroy him in the final judgment (verse 8). The Apostle says that the people who did not love the truth will be deceived by Antichrist when he appears.

It is very interesting to see that the wicked man, Antichrist, comes after times of great miracles. Many people attending churches these years are coming to see miracles. They are not coming to hear about Jesus, how and why He died for our sins, and to repent from what they are doing wrong. No, they are having mainly one purpose for coming to church, namely to see God work miracles in their lives.

Well, miracles are happening, also in the name of Jesus, but as Jesus states in Matthew 7, a lot of these miracles are done by “servants” not knowing their master:

Many will say to Me in that day, ‘Lord, Lord, have we not prophesied in Your name, cast out demons in Your name, and done many wonders in Your name? And then I will declare to them, ‘I never knew you; depart from Me, you who practice lawlessness!’.
(Matthew 7:22-23)

In other words, many of these “wonderful” miracles are “evil” deeds, only leading people away from the Word of God and the Gospel of Jesus Christ. But at the same time, these “signs and lying wonders” opens the door for the wicked Antichrist! This is what Paul emphasizes in 2. Thessalonians 2:9.

What is the logic behind this process? As mentioned in the introduction, the Gospel of Jesus Christ is what binds everything together in our society and in the World. Where the Gospel of Jesus Christ is given room, there is freedom and order. But in the end times, the Gospel of Christ will be forgotten. There may be a lot of Christian activities, but the main activity in many of the churches will not be preaching of the Gospel, but of miracles. And when the Gospel has been “defeated” by miracles, there is no power left in the Church, neither in the society, to prevent the coming of lawlessness, and the lawless evil man, Antichrist.

We are to take the warnings from Jesus and the Apostle seriously, living in a time where many false prophets stand in our midst. They are highly regarded as preachers or teachers coming in the name of Jesus, with miracles and wonders, but they lead the flock away from Him and His word. Behold, I have told you before…, Jesus says in Matthew 24:25.

It might seem to be a contradiction that Jesus warns His children against false teachers with one hand, and that He by His other hand sends false teachers to deceive the people (2. Thessalonians 2:11). How can that be? This is because God is a holy God. If we don’t want to listen to him, He gives us false teachers instead. If we do not love the Truth, He sends us delusion, so we believe the lie instead. This is exactly what Paul actually says in 2. Thessalonians 2:10: They were deceived “because they received not the love of the truth”. So we are to stand firm on His word, generally, but also specifically regarding the challenges of false teaching and “miracles” we do meet, and will meet, before Jesus is coming back.

Finally, but not least: The conclusion in Matthew 24 is that Jesus Christ will come again.

Then the sign of the Son of Man will appear in heaven, and then all the tribes of the earth will mourn, and they will see the Son of Man coming on the clouds of heaven with power and great glory. (Matthew 24:30)

May we not forget to focus on this, also while we are working on and reading about the time before He is coming back!