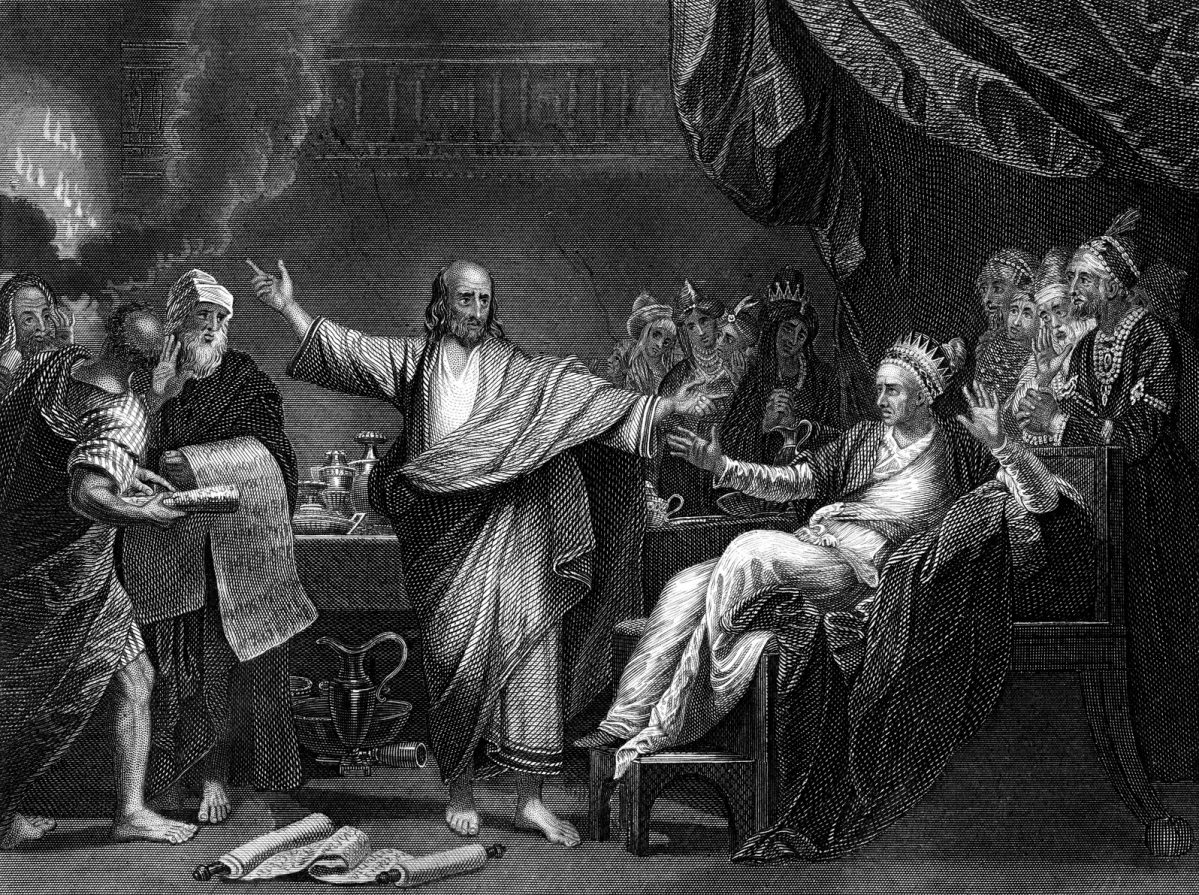 …He reveals deep and secret things; He knows what is in the darkness, And light dwells with Him.  (Daniel 2:20)

In Daniel Chapter 2 we are told that Nebuchadnezzar has a dream, but he does not understand the meaning of it. Now he asks the Magicians, the Astrologers, and the Chaldeans in Babylon, not only to tell the meaning, but also the content of his dream (!). The wise men urge the king to tell them the dream so they can interpret it, but he refuses. Finally, when they cannot fulfil his wishes, he wants to kill all the wise men of Babylon.

Now Daniel hears about this incident, and comes to the king asking for time for God to reveal him the dream and its meaning. Then the dream and its interpretation are revealed for Daniel in a night vision, and thereafter he comes to Nebuchadnezzar:

Blessed be the name of God forever and ever,
For wisdom and might are His.
And He changes the times and the seasons
He removes kings and raises up kings;
He gives wisdom to the wise
And knowledge to those who have understanding.
He reveals deep and secret things;
He knows what is in the darkness,
And light dwells with Him.

“I thank You and praise You,
O God of my fathers;
You have given me wisdom and might,
And have now made known to me what we asked of You,
For You have made known to us the king’s demand.”
(Daniel 2:20-23)

First Daniel tells Nebuchadnezzar the content of the dream:

You, O king, were watching; and behold, a great image! This great image, whose splendour was excellent, stood before you; and its form was awesome. This image’s head was of fine gold, its chest and arms of silver, its belly and thighs of bronze, its legs of iron, its feet partly of iron and partly of clay. You watched while a stone was cut out without hands, which struck the image on its feet of iron and clay, and broke them in pieces. Then the iron, the clay, the bronze, the silver, and the gold were crushed together, and became like chaff from the summer threshing floors; the wind carried them away so that no trace of them was found. And the stone that struck the image became a great mountain and filled the whole earth. (Daniel 2: 31-35)

Then Daniel tells the king the interpretation of the dream:

You, O king, are a king of kings. For the God of heaven has given you a kingdom, power, strength, and glory; and wherever the children of men dwell, or the beasts of the field and the birds of the heaven, He has given them into your hand, and has made you ruler over them all – you are this head of gold. But after you shall arise another kingdom inferior to yours; then another, a third kingdom of bronze, which shall rule over all the earth. And the fourth kingdom shall be as strong as iron, inasmuch as iron breaks in pieces and shatters everything; and like iron that crushes, that kingdom will break in pieces and crush all the others. Whereas you saw the feet and toes, partly of potter’s clay and partly of iron, the kingdom shall be divided; yet the strength of the iron shall be in it, just as you saw the iron mixed with ceramic clay. And as the toes of the feet were partly of iron and partly of clay, so the kingdom shall be partly strong and partly fragile. As you saw iron mixed with ceramic clay, they will mingle with the seed of men; but they will not adhere to one another, just as iron does not mix with clay. And in the days of these kings the God of heaven will set up a kingdom which shall never be destroyed; and the kingdom shall not be left to other people; it shall break in pieces and consume all these kingdoms, and it shall stand forever. Inasmuch as you saw that the stone was cut out of the mountain without hands, and that it broke in pieces the iron, the bronze, the clay, the silver, and the gold the great God has made known to the king what will come to pass after this. The dream is certain, and its interpretation is sure. (Daniel 2:37-45)

Daniel says in his interpretation of the dream that the image the king saw represents four kingdoms as it has four parts:

The dream also reveals what is going to happen during the Roman Empire. The fourth kingdom, he says, shall be like strong iron and break everything into pieces, but at the same time this kingdom will be partly of iron and partly of clay. In many ways this is a very good description of what we now know about the Roman Empire. It was powerful, covering a third of the world, but internally it was strongly divided, and the families were weak.

However, the most important thing in the days of the Roman Empire is the establishment of God’s own Empire. This kingdom shall never be destroyed and stand forever, Daniel says, and describes its establishment as a big stone, cut down from a mountain (without hands), breaking the whole image (the gold, silver, bronze and iron & clay) in pieces. The stone filled the whole earth!

We understand this more clearly when we see the difference between the image with the four kingdoms, and the other kingdom of stone crushing the first image to pieces. The four kingdoms were made and established by men (“bottom-up”), while the stone falling down came from heaven to earth. Nebuchadnezzar of the Babylonian kingdom, Alexander of the Greek, and the Caesars in the Roman kingdom seemed to be more powerful and stronger than Jesus Christ sent from heaven, but in reality their power was crushed in the twinkling of an eye as Jesus died on the Cross.

This is not a reality easily discovered by human eye. However, over time, the influence on the Roman Empire was extraordinary. 300 years after Jesus died on the Cross, the greatest persecutor of the Christian Church, the Roman Empire and Constantine the Great accepted Christianity as State Religion. A new world order was established as Christianity in the coming centuries and generations would become the most influential power on earth.

And still, although this impact seems to be extraordinary, the real impact of the “New Kingdom”, can only be seen in the Bible, the Word of God. Jesus says in John 12:31 that the Prince of this world, Satan, was to be thrown out as He died on the Cross. This did not mean that Satan would not appear in this world after that moment, but what happens is that Jesus establishes a new reality, a new kingdom and empire. This kingdom is forever, and here Satan does not have any access.

The borders for this kingdom are not fences protected by guards with great muscles. This kingdom is simply protected by the Word of God – preached in spirit and truth – and simple prayers carried by poor believers to an almighty God. This kingdom is not of this world – this is what Jesus stated in front of Pilate before He died. It is not physically visible here. We cannot see it yet. However, also in time, in the 2000 years that have gone since Jesus died, we have seen things that remind us of what is to come. In many areas of the world there have been good times. Especially in the regions where the Word of God was given room and time, peace was established, and we saw God’s blessings in many ways. Satan has been around in all these years, but his power has been limited by the Word, and by the Saints’ prayers. So it has been, and so it will be until the times right before Jesus returns with His new kingdom, visibly. In this time, right before Jesus comes back, we will understand how peaceful and blessed the years were before, as Satan will be released for a short time from his chains (Rev. 20). But after this time of Great tribulation, the time will come for this kingdom to appear for our eyes.