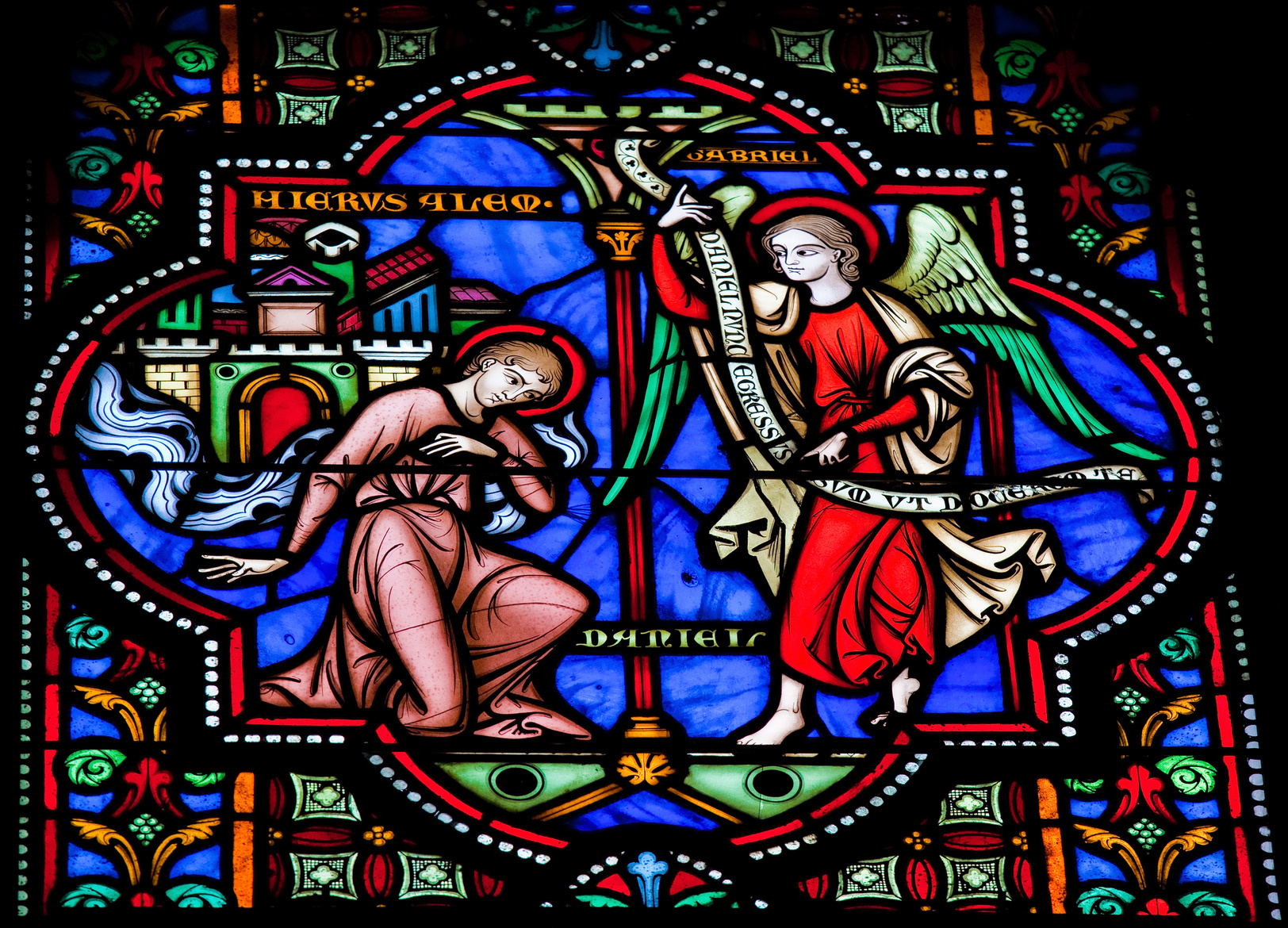 In Daniel chapter 7, Daniel has a dream. He dreams about four beasts, representing four kingdoms, and coming up from the sea (Daniel 7:3). He is told by an angel that what he sees will happen in the future (Daniel 7:17).

We will now look into Daniel’s dream, to see how the different beasts appear, and how they might fit into history. First, we will examine what a beast is in this context.

A beast in the prophecy of Daniel is to be compared with an empire. It is not just a normal country, but in its own time and understanding, a great kingdom. When we are told that these kingdoms are great, we should not understand them as kingdoms covering “the whole world” as we know it, but as kingdoms or empires as Daniel and Israel saw them in their time. We could say that the empires described, are empires that have a great influence on the country of Israel (and also Jerusalem) and its existence. There were other empires and dynasties in other parts of the world at the same time as Daniel has his dream, but they do not appear in this book, as they do not have any direct influence on Israel. However, the fourth beast seems to be an empire of more universal character than the other ones.

This is not easy to understand for people who live in those parts of the world that have been controlled by democratic governments, profoundly influenced by Christianity, respecting freedom of the individuals. Many places are, and have been, very nice places to live as also stated above when looking into the transformation of the Roman Empire. However, even though we can talk about glorious periods in modern history, there have also been periods coloured red by blood of millions and millions of innocent victims, shed in wars, holocausts and slavery, and now there has never been so many refugees in the world, since the Second World War.

This pessimistic point of view may be a surprise, but in fact Jesus and the apostles confirm this way of thinking. John the Apostle says in 1. John 5:19: “We know that we are of God, and the whole world lies under the sway of the wicked one”, and this is confirmed by Jesus as he stands before Pilate:

My kingdom is not of this world: if my kingdom were of this world, then would my servants fight, that I should not be delivered to the Jews: but now is my kingdom not from hence. (John 18:36)

We are also reminded of this fact in Luke 4 as Jesus is tempted by Satan (even though this is before Jesus died on the Cross and bound the devil):

Then the devil, taking Him up on a high mountain, showed Him all the kingdoms of the world in a moment of time. And the devil said to Him, “All this authority I will give You, and their glory; for this has been delivered to me, and I give it to whomever I wish. Therefore, if You will worship before me, all will be Yours. (Luke 4:5-7)

This world and its kingdoms are not good as such. As long as we see death, sin and evilness where we live, we are reminded about this fact. We are still not in Jesus’ eternal kingdom. For long periods there may be peace as the Word of God is given room, and a beast might get a human heart (as the second beast in Daniel 7 – the lion received a human heart). However, over time, and in a retrospective, all empires generally, and the last empire specially, will be remembered and understood as Satan’s empires, impure, evil, filled with sexual immorality and persecutors of Christ and His body.

Looking into Daniel chapter 7 we read the following about the four beasts appearing:

Daniel spoke, saying, “I saw in my vision by night, and behold, the four winds of heaven were stirring up the Great Sea. And four great beasts came up from the sea, each different from the other. The first was like a lion, and had eagle’s wings. I watched till its wings were plucked off; and it was lifted up from the earth and made to stand on two feet like a man, and a man’s heart was given to it.

And suddenly another beast, a second, like a bear. It was raised up on one side, and had three ribs in its mouth between its teeth. And they said thus to it: “Arise, devour much flesh!”

After this I looked, and there was another, like a leopard, which had on its back four wings of a bird. The beast also had four heads, and dominion was given to it.

After this I saw in the night visions, and behold, a fourth beast, dreadful and terrible, exceedingly strong. It had huge iron teeth; it was devouring, breaking in pieces, and trampling the residue with its feet. It was different from all the beasts that were before it, and it had ten horns. I was considering the horns, and there was another horn, a little one, coming up among them, before whom three of the first horns were plucked out by the roots. And there, in this horn, were eyes like the eyes of a man, and a mouth speaking pompous words. (Daniel 7:2-8)

There are four beasts in Daniel 7, a lion, a bear, a leopard, and a different beast. The lion becomes somehow human by standing on two feet, getting a human heart. The bear is aggressive and by far more “beasty” than the lion. The third beast, the leopard, has four wings of a bird, and also four heads, and must be very powerful, as dominion was given to it. The last beast is terrible, universal and very strong.

The Ancient of Days

Now Daniel sees what is going to happen after the appearance of the four beasts. He sees God, the Ancient of Days, on a throne, and the kingdom appearing after the fourth beast:

I watched till thrones were put in place,
And the Ancient of Days was seated;
His garment was white as snow,
And the hair of His head was like pure wool.His throne was a fiery flame,
Its wheels a burning fire;
A fiery stream issued
And came forth from before Him.
A thousand thousands ministered to Him;
Ten thousand times ten thousand stood before Him.
The court was seated,
And the books were opened.

I watched then because of the sound of the pompous words, which the horn was speaking; I watched till the beast was slain, and its body destroyed and given to the burning flame. As for the rest of the beasts, they had their dominion taken away, yet their lives were prolonged for a season and a time.

I was watching in the night visions,
And behold, One like the Son of Man,
Coming with the clouds of heaven!
He came to the Ancient of Days,
And they brought Him near before Him.
Then to Him was given dominion and glory and a kingdom.
That all peoples, nations, and languages should serve Him.
His dominion is an everlasting dominion,
Which shall not pass away,
And His kingdom the one
Which shall not be destroyed.
(Daniel 7:9-14)

This is a very beautiful passage. The beasts’ dominions are gone, and “One like the Son of Man” appears in front of “the Ancient of Days”. “The Son of Man” is now given dominion and glory and another kingdom. This is an everlasting kingdom that shall not pass away and never be destroyed.

The Son of Man in this passage is Jesus Christ himself. It is He who declared in front of Pilate that His kingdom is not of this world. He is now given an eternal kingdom, the kingdom He established on the Cross, terminating all kingdoms in this world.

The Interpretation of the Vision

I, Daniel, was grieved in my spirit within my body, and the visions of my head troubled me. I came near to one of those who stood by, and asked him the truth of all this. So he told me and made known to me the interpretation of these things: ‘Those great beasts, which are four, are four kings which shall arise out of the earth.  But the saints of the Most High shall receive the kingdom, and possess the kingdom forever, even forever and ever.’

“Then I wished to know the truth about the fourth beast, which was different from all the others, exceedingly dreadful, with its teeth of iron and its nails of bronze, which devoured, broke in pieces, and trampled the residue with its feet; and the ten horns that were on its head, and the other horn which came up, before which three fell, namely, that horn which had eyes and a mouth which spoke pompous words, whose appearance was greater than his fellows.

I was watching; and the same horn was making war against the saints, and prevailing against them, until the Ancient of Days came, and a judgment was made in favour of the saints of the Most High, and the time came for the saints to possess the kingdom.

“Thus he said:
‘The fourth beast shall be
A fourth kingdom on earth,
Which shall be different from all other kingdoms,
And shall devour the whole earth,
Trample it and break it in pieces.
The ten horns are ten kings
Who shall arise from this kingdom.
And another shall rise after them;
He shall be different from the first ones,
And shall subdue three kings.
He shall speak pompous words against the Most High,
Shall persecute the saints of the Most High,
And shall intend to change times and law.
Then the saints shall be given into his hand
For a time and times and half a time.

‘But the court shall be seated,
And they shall take away his dominion,
To consume and destroy it forever.
Then the kingdom and dominion,
And the greatness of the kingdoms under the whole heaven,
Shall be given to the people, the saints of the Most High.
His kingdom is an everlasting kingdom,
And all dominions shall serve and obey Him.’

Daniel dwells with the fourth kingdom, the terrible one. This kingdom will cover the whole world, devour it and break it in pieces.. This kingdom has 10 horns, and furthermore, we see that a little different horn, an eleventh king, will come from this kingdom. This small horn is the person Antichrist. The saints, the Christians, will be given into his hand for a certain time – “a time and times and half a time”, pointing to the very end of our history. However, the most important of this interpretation is what comes after this time of tribulation, there will appear another kingdom, Gods kingdom:

His kingdom is an everlasting kingdom,
And all dominions shall serve and obey Him.