Many of the texts I have been discussing in this book might leave us scared and worried for the future. We know that the hope of Jesus Christ is shining through what we have read in the different passages in the Bible, but we also know that before we reach the “other side”, we have some hard hurdles to go through. Will we make it all the way? Can we resist falling away from Jesus in the great Tribulation, or against being deceived when “the Rebellion” becomes stronger and stronger? What about our family and friends, my brothers and sisters, children and parents?

As mentioned earlier, it has not been my intention by writing this book, to leave the reader in hopelessness and fear. First, my purpose has been to give the reader a tool realistically telling where about we are in history, what we are facing now, and what to expect in the years to come. Then I want to remind the reader of the fact, that Jesus wants to keep us for eternity – and that He, among other things, has showed this by giving us many passages dealing with the end times. By relying on His word we will experience that His word is most certainly true. Finally, I want to lead the reader to the source, the Bible, the only place where we can find the power and strength to overcome the many attacks from the devil. By trusting the Word, we will namely be connected to Him who is our strength, as He who is in us “is greater than he who is in the world.” (1. John 4:4b)

Jesus Christ does not want us to lose our faith and perish. He will do whatever He can to prevent us from being deceived by the devil or by any of his servants. He has shed His blood for us, to save us, and thereby He has paid for our sins. His love for us, are without limits, and He will do everything to keep us, also in the times to come:

What then shall we say to these things? If God is for us, who can be against us? He who did not spare His own Son, but delivered Him up for us all, how shall He not with Him also freely give us all things? Who shall bring a charge against God’s elect? It is God who justifies. Who is he who condemns? It is Christ who died, and furthermore is also risen, who is even at the right hand of God, who also makes intercession for us. Who shall separate us from the love of Christ? Shall tribulation, or distress, or persecution, or famine, or nakedness, or peril, or sword? As it is written:

“For Your sake we are killed all day long;
We are accounted as sheep for the slaughter.”

Yet in all these things we are more than conquerors through Him who loved us. For I am persuaded that neither death nor life, nor angels nor principalities nor powers, nor things present nor things to come, nor height nor depth, nor any other created thing, shall be able to separate us from the love of God which is in Christ Jesus our Lord.”(Romans 8:31-39) 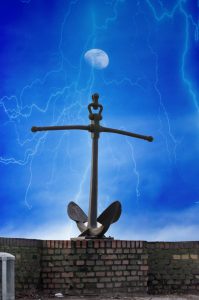 Paul, the Apostle says in the end of this passage that He is persuaded that nothing shall be able to separate us from the love of God which is in Christ Jesus our Lord. Many people’s response to this, would be that “I hope so too”. By saying this, they are not hoping the Biblical way, but the “normal” way. The word “hope” is namely, in most people’s understanding, generally distinguished from something that will happen by certainty in the future. We could say, “I don’t know if I got a good grade on my exam, but I hope so.” But in the Bible, the Hope is not wishful thinking, but something much more firm created in a Christians heart by the Word of God. The author of Hebrews says it in this way:

For when God made a promise to Abraham, because He could swear by no one greater, He swore by Himself, saying, “Surely blessing I will bless you, and multiplying I will multiply you.” And so, after he had patiently endured, he obtained the promise.  For men indeed swear by the greater, and an oath for confirmation is for them an end of all dispute.  Thus God, determining to show more abundantly to the heirs of promise the immutability of His counsel, confirmed it by an oath, that by two immutable things, in which it is impossible for God to lie, we might have strong consolation, who have fled for refuge to lay hold of the hope set before us.

“This hope we have as an anchor of the soul, both sure and steadfast, and which enters the Presence behind the veil, where the forerunner has entered for us, even Jesus, having become High Priest forever according to the order of Melchizedek. (Hebrews 6:13-19)

This text says that the Christian hope is as an anchor placed in behind the veil of the utter most holy place. This place is not in the physical Temple, but represents the place where God dwells in Heaven. We could not, and cannot, enter Heaven as we are evil in God´s light, but Jesus Christ became our High Priest and entered in front of God´s dwellingplace, and shed His blood to pay for our sins. By doing this, He left the heavy part of an anchor in heaven, giving us the other part as hope – a Christian hope. Just like a real anchor prevents ships from drifting, we are safe when connected to this anchor.

How will we be kept to this anchor in the future? The above verses state that this anchor is not something physically as we normally think of an anchor or something we by our hand needs to hold on to. However, it exists as sure and steadfast confirmed by two things, God’s promise, and God’s oath. So when listening to God´s promise the anchor becomes real, and when we are reminded of His oath, confirming His own promise, it becomes even more real. So when connected to God’s Promise, His word, the anchor becomes a reality. We will now find ourselves firmly connected to Heaven, not by our own will, but by God’s Word.

I would like to close this book, by quoting two passages from the book of Revelation. First, I have found it to be of uttermost importance for myself to keep clear in mind who I will be meeting when everything is over, that this is not an abstract reality, but a person, namely the King, Jesus Christ, himself:

Now I saw heaven opened, and behold, a white horse. And He who sat on him was called Faithful and True, and in righteousness He judges and makes war.  His eyes were like a flame of fire, and on His head were many crowns. He had a name written that no one knew except Himself. He was clothed with a robe dipped in blood, and His name is called The Word of God. And the armies in heaven, clothed in fine linen, white and clean, followed Him on white horses. Now out of His mouth goes a sharp sword, that with it He should strike the nations. And He Himself will rule them with a rod of iron. He Himself treads the winepress of the fierceness and wrath of Almighty God. And He has on His robe and on His thigh a name written:”

“KING OF KINGS AND
LORD OF LORDS.”

Finally, I have chosen to finish in the same way as John the Apostle finishes the Revelation the Lord gave him (Rev. 22:18-21). Here He writes about what he received:

For I testify to everyone who hears the words of the prophecy of this book: If anyone adds to these things, God will add to him the plagues that are written in this book; and if anyone takes away from the words of the book of this prophecy, God shall take away his part from the Book of Life, from the holy city, and from the things which are written in this book.”
“He who testifies to these things says, “Surely I am coming quickly.”
Amen. Even so, come, Lord Jesus!
The grace of our Lord Jesus Christ be with you all. Amen.